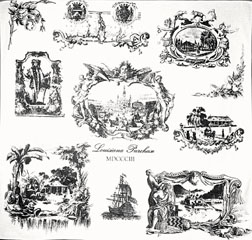 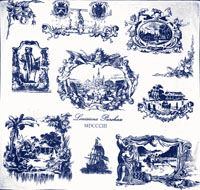 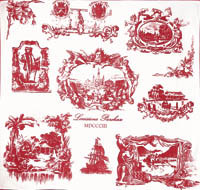 Order Toile by Yard or Square

Architectural and historical images from the Louisiana Purchase area were used in the design of this 54-inch repeat toile which features New Orleans' Place d'Armes where the Purchase was signed by the French, Spanish and Americans in late 1803. Saint Louis Cathedral, designed by French architect Nicolas de Pouilly, is flanked by the Cabildo and Presbytere, financed by Andres Almonester y Rojas, an 18th century New Orleans' developer and philanthropist from Ronda, Andalucia.

Meriwether Lewis in native American costume represents the Lewis and Clark Expedition. An Acadian cottage with banana trees, live oaks and alligator represents the colonization, beginning in 1765, of the old Atakapas country in South Louisiana with the displaced French from Acadie, now Nova Scotia.

From the New Orleans Notarial Archives come images of tobacco, indigo and sugar plantations along the Mississippi River. These French and Spanish colonial style buildings symbolize the Mississippi Delta during the French, Spanish and Federal periods. The Historic New Orleans Collection provided the flatboat image with the American flag raised, recalling the first third of the 19th century when flatboats were floated downriver with goods from Arkansas, Tennessee and Kentucky as well as Illinois, Indiana and the heartland of the United States.

These boats were dismantled and the wood was used to build houses. Note the coat of arms of the Company of the Indies and of the French Province of Louisiana as well as a map of the Mississippi River with locations of the many native American tribes that lived along the banks. An 18th century brigantine illustrates the transportation from France and Spain of the colonial settlers.

The cartouches that frame the images come from French and Spanish maps of the 17th, 18th and 19th centuries. Cotton plants and magnolia blossoms are used as borders.

The 54-inch square in black, navy, cranberry. aqua or green, on an off-white ground of all-cotton, preshrunk, is suitable for framing, as a table cloth or as a wall hanging.

Toile by Yard or Square

Our material has received such acclaim that we now offer it in original products such as scarves, linens, aprons, curtains and shower curtains, vintage-style dresses, and many more. See our .